ARARAT is a brand of Armenian brandy, that has been produced by the Yerevan Brandy Company since 1887. It is made from Armenian white grapes and spring water, according to a traditional method. The brand's "ordinary brandies" are aged between 3 and 6 years. Its "aged brandies" are between 10 and 30 years old.

During the Yalta Conference in 1945, Winston Churchill was so impressed with the Armenian brandy "Dvin" given to him by Joseph Stalin, that he asked for several cases of it to be sent to him each year. Reportedly 400 bottles of "Dvin" were shipped to Churchill annually. This brandy was named in honor of the ancient capital Dvin, and was first produced in 1943.

During a 2013 meeting at his personal villa in Sochi, Russian president Vladimir Putin gave British Prime Minister David Cameron a bottle of Armenian brandy as a gift, recalling Stalin's offering to Churchill in 1945.

Brandy production is a big business in Armenia. Yerevan, the country’s capital, boasts more brandy distillers per capita than any other city in the world, including Cognac in France. 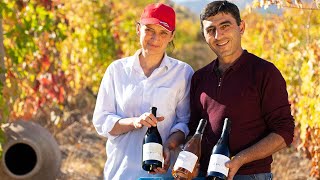 Armenian Wine - Taste The Country In Every Glass! HD